First, for context, a bit of very early magic lantern history: These two pictures are both titled, “A General Display of the Arts and Sciences.” They were the frontispiece illustrations for two editions of The Royal Encyclopaedia-— 1698 & 1798.  Both frontispieces contained magic lanterns at the lower left, as shown in the detail.

The 1698 version (top image), was published about 40 years after the invention of the magic lantern.  It shows that the lantern was already one of the critical instruments of the Arts and Sciences of that time.  The 1798 version, (bottom image) is 100 years later, and omits many things from the earlier version. But the lantern remains, and remains important.

This Museum’s collection of lantern imagery from 1800–1965 demonstrates that the lantern was still permeating the Arts and Sciences in America another 100+ years after the 1798 Encyclopaedia, and 250–350 years after its invention.  See a video on magic lantern development here.

Next: Phantasmagoria Spooks the Crowd 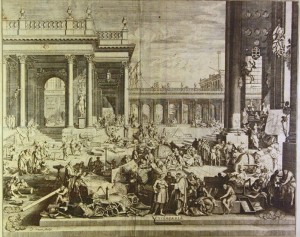 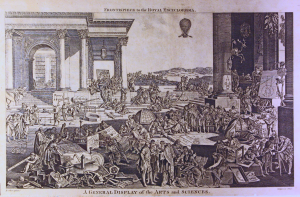