The Phantasmagoria Spooks the Crowd!

The first known magic lantern show in America was in 1743 in Salem, Massachusetts.  By the 1800s, lantern shows were becoming common, especially Phantasmagorias, and later, the Pepper’s Ghost shows.

The Phantasmagoria, advertised here in an 1819 Philadelphia newspaper, was an early form of ghost and goblin lantern show.  It featured a number of dramatic effects, most notably a skeleton that appeared to come hurtling at the audience, becoming larger as it came closer, as in the 1799 French show depicted. The effect was created by rear-projection, with a lantern on wheels that started up close to the screen, creating a small image of a skeleton.  Then the lantern was rolled quickly away, and the skeleton seemed to explode in size.  See it explained here and here.

Phantasmagoria and Pepper’s Ghost effects were seen in America up to the 1860s. They reappeared in the 1920s as part of the efforts of magicians like Prof. Smith to debunk spiritualism (broadside, lower  left). 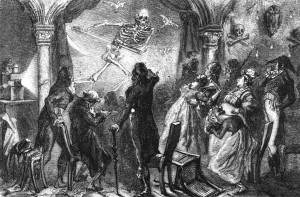