At about the same time as these new developments in light sources and lanterns, the first photographic magic lantern slides were created in the 1850s. Photographs of the real world could now be taken and projected—leading to an explosion of travel images. “Dry plate photography,” developed in the 1870s, did away with the cumbersome apparatus of the earlier “wet plate” process and made the creation of photographic magic lantern slides easy for any amateur. Amateur photographic shows, especially of travel, proliferated.

But photography could also reproduce famous paintings, or etchings illustrating any subject on magic lantern slides, including literary subjects such as stories, songs, and poems. In America the technique of photographing illustrations was developed by the C. W. Briggs Company of Philadelphia, using the talents of the man who would become America’s first great screen artist, Joseph Boggs Beale (portrait).

Beale would create a series of black-and-white 13″ x 13″ illustrations for a poem (say “The Raven”) or an historic subject (say The Civil War) picked out by Briggs.  These were photographed in the Briggs factory, photographically reduced, printed to an emulsion on glass, and then packaged as black-and-white magic lantern slides, or hand colored.  From one Beale master painting, a hundred copies might be made, or a thousand, or, for some popular subjects, perhaps as many as ten thousand.

Briggs was a wholesaler who sold Beale’s 2,000 slide images through more than 100 different lantern dealers, blanketing the market.  Almost single-handedly, Beale created American screen entertainment for the generation before the movies. Some of Beale’s slides are displayed in the Museum’s Exhibits. See more here, and click here for a book on Beale

Three basic types of magic lantern slide formats were produced,—”Wood Frame” (4″ x 7″), with a wood frame, usually encasing a circular glass image; “Economy” (3 ¼″ x 4″), all glass, with taped edges; and “Children’s Slides,” which came in many sizes, usually smaller than adult slides, usually with three or more images on a single slide with taped edges.

For children, and indeed for many adults, the most popular slides in the entertainment shows were animated comic slides. (They were often used at the end of illustrated lectures too, “as a treat.”) These slides were constructed with moving pieces of glass, so that action could be depicted on screen. (See how they’re made here.) And see the most popular of all, “The Ratcatcher,” here.  There were hundreds of different subjects, often slapstick comedy. See more here. The end of a show often brought a spectacular display of colored lights, created with “chromatrope” slides—“color throwers.” These dazzling slides came in many different patterns. (Click on “GIF” image and see more chromatropes here.) 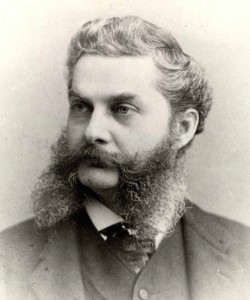 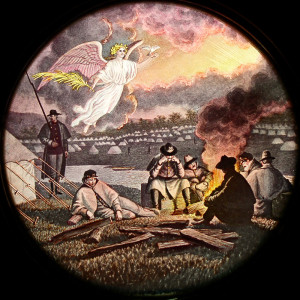 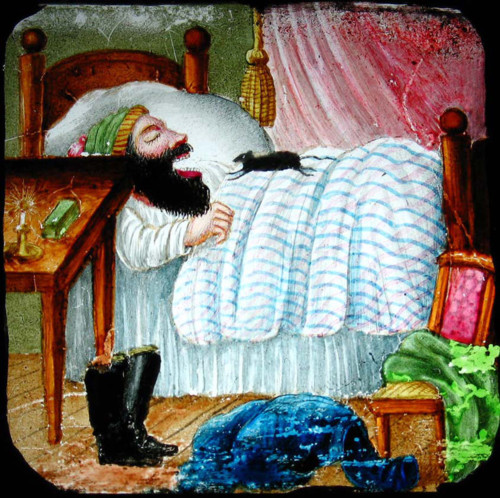 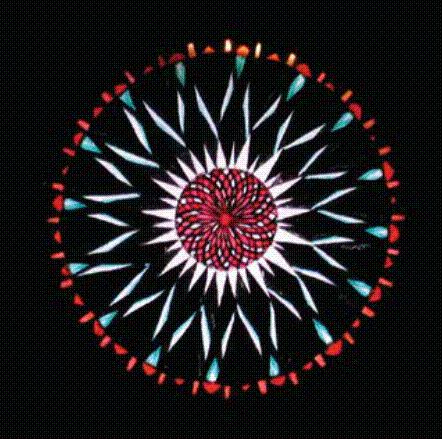