In the 1850-1870 period it became possible to give magic lantern shows to a wide variety of audiences — because of the combination of new light sources for the lantern, and the photographic method of creating and mass-producing slides. The result, from the 1880s to the 1920s, was an explosion of interest in magic lantern shows. (Shown, Burton Holmes giving his travelogue before an audience of several thousand.)

The interest in magic lantern shows continued even after the movies came to America in 1896, and persisted more or less unabated until after the first World War. Altogether, millions of slides were produced.  And millions of people watched those slides on screen every year.

The Museum’s exhibits document the tremendous diversity of magic lantern shows in America, and the way they molded every facet of the nation’s culture.  Start your exploration with the Ten Minute Tour.

And if you have to leave us now, please spread the word on social media, using the icons below! 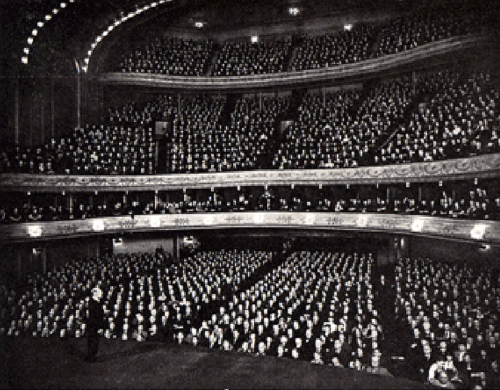